The Dutch companies MECAL Engineering and HURKS BETON have developed a unique concept for very tall hybrid wind towers. Together with the German project developer JUWI, they founded a new company, Advanced Tower Systems B.V., and initiated a pilot project in 2008 in order to present their new concept to the wind energy industry. The pilot project was carried out on a test field of Windtest Grevenbroich GmbH in Grevenbroich near Dusseldorf, Germany. 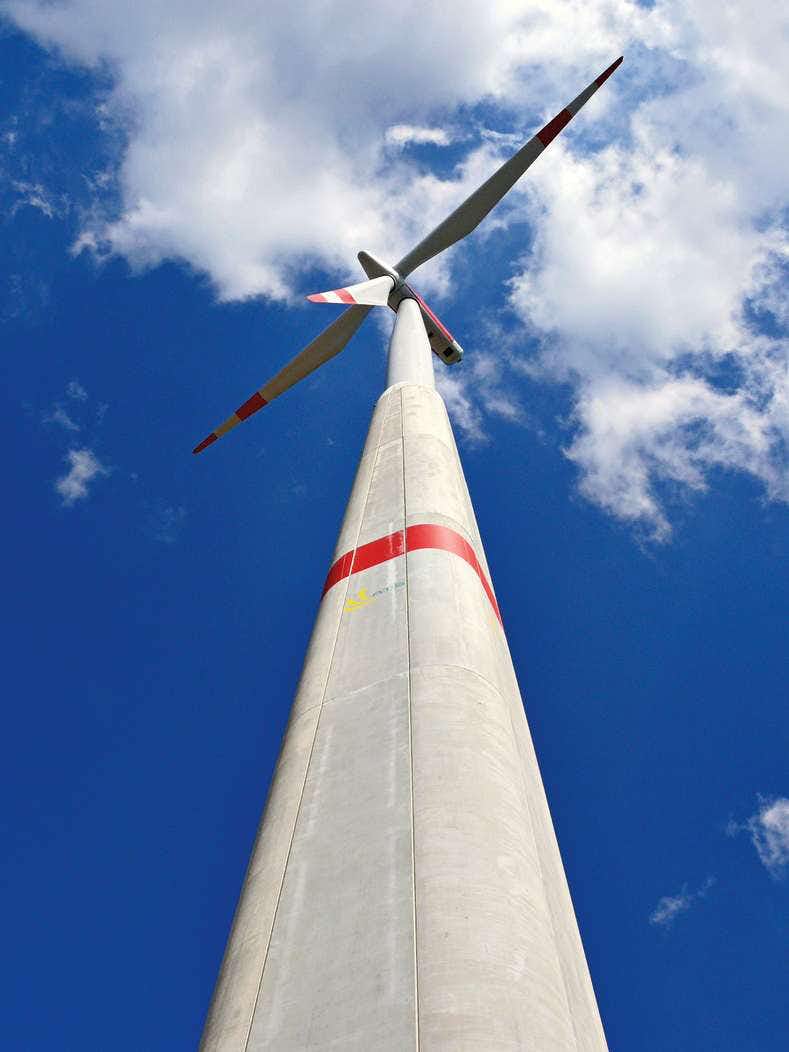 The Advanced Tower Systems (ATS) Hybrid Tower consists of two parts. The lower part - approximately 74m high - consists of precast concrete elements, and the upper part - approx. 55m high - is a steel tower. Both parts are jointed together by means of an adaptor ring. The rotor axis is situated 133m above ground, and the tip of the rotor reaches a maximum height of 180m. The tower is one of the highest wind towers in the world: Usually, conventional steel towers do not exceed heights of 100m.

Some important features distinguish ATS wind turbines from other tower concepts with precast concrete elements. There are two types of concrete precast elements which are cast in what is known as the single mould system. The rounded corner elements have the same geometry over the full height of the tower. The flat and linear segments become smaller at higher levels. The dimensions and the weight of individual concrete elements were chosen in such a way as to allow transportation using conventional trucks.

All of the segments were manufactured from high strength concrete at the HURKS BETON concrete plant near Eindhoven, Netherlands and then transported to the building site in Grevenbroich, Germany on trucks. Assembly of the precast elements on the concrete foundation slab took place at the end of 2008 using a mobile crane. Individual segments were temporarily fixed by bolts at the joints, which were grouted later on.

The precast concrete shaft of the tower was anchored to the foundation by means of prefabricated DYWIDAG Post-Tensioning Tendons. Three type 19x0.6", St 1860N/mm², 15,7mm Ø tendons were installed at each corner of the tower. The stressing anchors were situated at the top of the adaptor ring, and dead-end anchors were cast into the foundation slab. The tendons were preassembled at DSI’s plant in Langenfeld and shipped to the job site in Grevenbroich on drums. After the installation of the DYWIDAG Tendons with the aid of a mobile crane, all of the tendons were tensioned and subsequently grouted in order to provide efficient corrosion protection for the post-tensioning strands.

After completion of the steel part of the tower with the aid of a crawler crane at the beginning of 2009, a SIEMENS turbine with a large 93m diameter rotor was installed. The first ATS Tower was connected to the electricity net in Grevenbroich in April 2009 and has been delivering low priced, green energy ever since.

The pilot project has shown that ATS wind towers can be constructed quickly using slender high quality concrete precast elements. Measurements have proven that the SIEMENS turbine placed on the ATS Tower produces almost 20% more energy than the same type of turbines mounted on conventional steel towers, with the hub situated some 30m lower. In addition, the ATS concept provides an economically attractive possibility for generating wind energy at locations with low and moderate wind speed.