Roanoke Rapids Dam is approx. 930m long dam with 24 radial gates and a maximum height of approx. 22m and has been operational since 1955. The power plant adjacent to the dam includes four propeller type turbines generating up to 104MW. 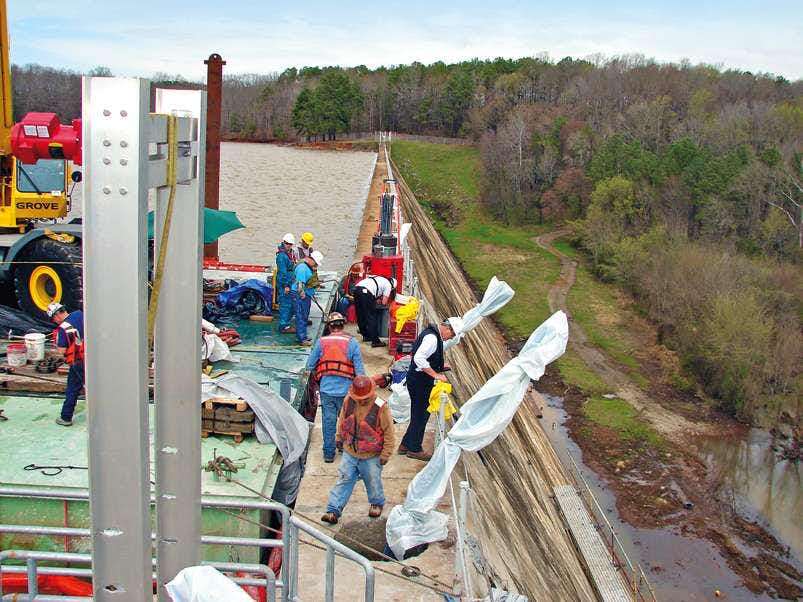 Since 1985, the dam has been regularly tested for seepage, pressures acting on the foundation and deformation. From 2006 to 2008, a two-phased investigative program was carried out that included piezometric measurements, load measurements and core hole drilling through the dam into the foundation.

The investigations showed that a long-term alkali-silica reaction (ASR) had lead to an expansion of the concrete and a deterioration of the mortar fraction. In addition, a crack that was up to 2.5cm wide was detected in the dam. The safest and most efficient solution for the comprehensive strengthening of the dam was to grout the crack and install rock anchors across the crack plane.

As calculations indicated that the crack would keep widening in the future, the decision was made to use restressable anchors. This allows for the future adaptation of the anchors to the crack development and to possible ASR alterations. Consequently, the anchors were designed with sufficient free lengths to adjust their load at any time in the future. To repair the dam, DYWIDAG supplied epoxy coated 30-0.6" DYWIDAG Strand Anchors with re-stressable anchorages for future load adjustment. Their length was between 30m and 40.5m.

In addition, DYWIDAG supplied 15 elasto magnetic DYNA Force® Sensors that were factory placed over individual strands of five anchors. Three DYNA Force® Sensors were installed per anchor. They were used as an additional load control during the performance/ proof test and lock-off load transfer procedure and for future anchor load monitoring during the life of the structure.

The DYNA Force® Sensor System is very easy to install and use, allowing a reliable and accurate load monitoring of the strand or bar anchor.