The Gajo Arch Bridge: A Bridge Leading the Way into the Future

Southern part of the Republic of Korea is characterised by its large number of coastal islands. As population density is particularly high along the coast, a large number of these islands are inhabited. Nevertheless, in many cases, connections to the mainland are insufficient. This results in problems with the local economies. Because the affected regions do not have adequate infrastructures, they have been unable to keep up with the economic growth of the rest of South Korea. 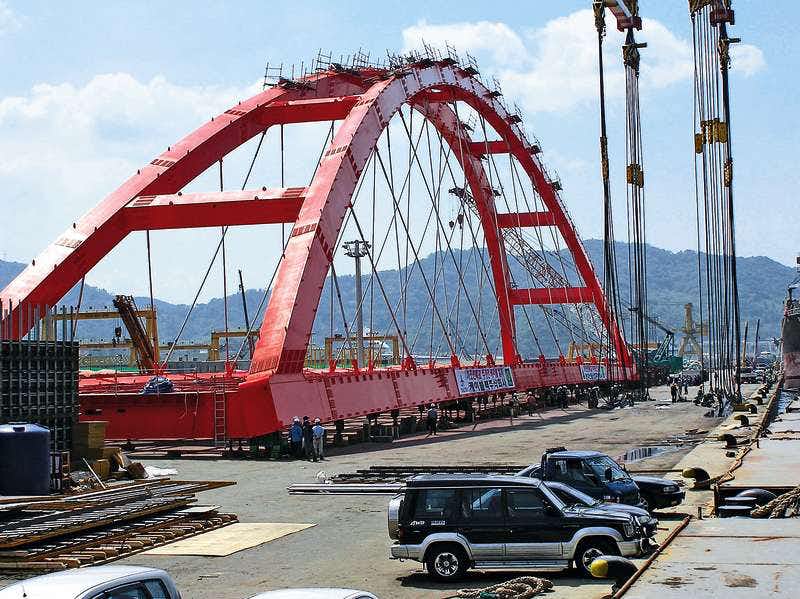 This was also the case for Gajodo Island, an island with a total area of 5.86km² located in the south of Korea. Crossing to the mainland used to be tedious and time consuming for the approximately 5.000 inhabitants living on the island.

To correct this infrastructure problem, a decision was made to build a bridge to the island. Cabletek was chosen to build the Gajo Arch Bridge, a project scheduled to be completed in December 2008. The bridge strengthens opportunities for economic growth on Gajodo Island, thus improving the quality of life for the island’s inhabitants.

The Gajo Arch Bridge is a high quality arch bridge whose architectural design allows it to blend in well with the local environment. It consists of approach ramps on both sides and includes three steel arches as the main bridge apertures. Both of the exterior arches have spans of 90m each while the principal arch has a span of 150m. Both the arches and the floor beams were constructed on shore and assembled using DYWIDAG DYNA Grip® stay cables functioning as hangers. The stay cable system was also preassembled. Subsequently, each arch was transported to the erection point using a floating crane and placed onto the bridge bearings. The bridge deck was constructed later. The lengths of the stay cables were precisely determined such that they were prestressed to their required load by dead weight of the bridge.

For this important infrastructure project, DSI supplied a total of 160 DYNA Grip® DG-P12 anchorages that were perfectly suited for the fabrication of preassembled stay cables used as hangers for this important arch bridge.

Construction of a Coastal Road on La Réunion Island