In the historical district of Alfama in Lisbon, a new five-star hotel - Hotel Cais de Santarém - belonging to the Hotusa Hotels Group is being built. 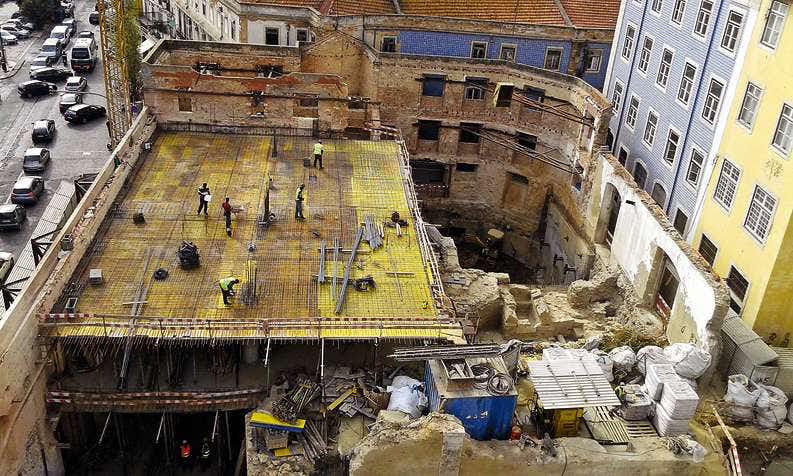 The new 91 room Eurostars Hotel is being developed near the future cruise terminal on a total area of approximately 8,400m².

In this special construction project, the former palace of the Marquis of Fronteira and the Count of Linhares is being restored. The palace was severely damaged by an earthquake in 1755 and was temporarily used as a storage facility for iron in the 19th century. Due to the fact that important archeological findings from the Roman times and other periods have been discovered on the jobsite, the hotel will also be a museum.

The General Contractor, Constructora SANJOSE, was awarded the contract for demolition work, digging the excavations and building the necessary containment structures. Due to the palace’s advanced state of decomposition, the General Contractor had to be very careful and precise. Combining the technical demands of a five-star hotel with the preservation of an important cultural heritage site was another major challenge.

First, all elements that were either contemporary or of low archeological value were demolished. Afterwards, a foundation consisting of micropiles was built for which bore holes with a total length of 9.5km were necessary. Subsequently, reinforced concrete blocks were positioned on the base level of the existing walls on top of the steel piles.

Afterwards, the General Contractor asked DSI Construction Portugal to supply DYWIDAG Bar Tendons and couplers that were needed for tightening the concrete blocks and holding them in place.

By cooperating closely with the General Contractor, DSI Portugal was able to supply all necessary products and systems to the jobsite on time. DSI is proud to have contributed to a rehabilitation project in one of Europe’s oldest cities.